THE PARADOX OF TOLERANCE: A CASE STUDY 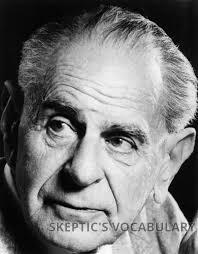 Of the creed of philosophers of science, Karl Popper, the 20th century Austrian-English philosopher is the favorite of many scientists. He had made a ‘heroic’ image of scientists and the pursuit of science. His notion of ‘falsification’ is considered by many scientists as the principal demarcation between science and pseudoscience. Falsification principle states that all scientific hypothesis leaves a possibility that an experimental outcome would falsify it. If for instance, a hypothesis state that all metals expand on increase of ambient temperature, a single conclusive example of a metal that doesn’t expand with increase in temperature would falsify the statement. A statement that does not extend a possible future condition that would go against it, is NOT a scientific statement. In other words, scientific hypothesis should ‘stick its neck out’ when it is framed.  According to Popper, this ability of scientific statements to expose the condition of its own falsification is the essential feature of ‘true science’. Pseudosciences, on the contrary, do not expose themselves like this. Rather, it would ‘explain out’ the situations that have emerged contrary to their initial statement. Thus, pseudosciences won’t let itself be refuted by objective evidence, but would rather ‘somersault’ with adhoc or posthoc explanations.1

Convinced of the ‘openness of science’ and the contribution of its openness to the progress of mankind, Popper wrote a two-volume book titled “Open society and its enemies”. In this book-series, Popper makes a statement widely known as the ‘Paradox of tolerance’. He states that unlimited tolerance must lead to the disappearance of tolerance.

“If we extend unlimited tolerance even to those who are intolerant, if we are not prepared to defend a tolerant society against the onslaught of the intolerant, then the tolerant will be destroyed, and tolerance with them”

Many leading social commentators agree to this idea. For instance, John Rawls, who propounded an influential theory of justice, state that while as a general principle a just society should be tolerant to the intolerant, the extend of tolerance is NOT infinite.

“While an intolerant sect does not itself have title to complain of intolerance, its freedom should be restricted only when the tolerant sincerely and with reason believe that their own security and that of the institutions of liberty are in danger”

I think the Islamic proselytizer Zakir Naik is a test case to apply this principle.

Zakir Naik is a medical doctor and he claims he is a student of comparative religion. He conducts massive meeting with tens of thousands of audience and takes questions from the audience. His television Peace TV broadcasts these sessions and its videos are propagated through online media. He quotes Quranic verses from memory and gives an impression that he is a man of reason and logic. Having a MBBS degree in medicine, he claims he is a man of science. Many Muslims consider him as a great intellect and the bulwark of their faith.

Recently, during the investigation of one of the terrorists attacks in Bangladesh few of the culprits were found to be followers of Zakir Naik. This brought media spot light on Naik, and there was hue and cry for banning him. Many of my Muslim colleagues thought this was unreasonable as Naik is always open to debate and he constantly condemns violence. They conclude that attack on Zakir Naik is just one of the skewed narrative of hypernationalist media in India.

I do not subscribe to many of the jingoist viewpoints of mainstream media. But on the question of Zakir Naik, I agree with them wholesomely. The reason is the very reason Karl Popper cited: The Paradox of tolerance. For clarity of the argument, I shall derive it point by point.

He states that Taliban is correct, and is, in fact, teaching Buddhist ‘real Buddhism’ by destroying idolatry.

He does not think that it is necessary that a majority sect should protect a minority sect when the majority has absolute power at its disposal. For this, he answers that with respect to religion, Saudi Arabia and the kind of nationhood Taliban promoted is ABSOLUTELY correct.2 He argues that since Taliban and Saudi Arabia know that they are absolutely true, it is incorrect for them to follow the falsehood. He says it like a mathematics teacher being forced to teach 2*2 is 5, when he knows it is incorrect.

I think this argument of Zakir Naik sets the tone of our approach to Zakir Naik’s thinking.

2. In other words, suppose Naik’s creed become majority in India, and if his followers vandalize sites like Ajantha caves, Somnath temple or Vellankani Chruch, he would extend the argument that they are indeed teaching Hindus and Christian the ‘real’ teaching of Hinduism and Christianity ( as per Naik interpretation of comparative religious study).

3. Suppose in such a state, a Muslim gets disillusioned and become agnostic and tend to propagate it ( read discloses the reasons of he becoming agnostic and argues his points in a public forum).

Zakir Naik’s  gives answer for this no uncertain terms

Punishment for apostasy and its propagation in a Muslim realm is death.

4. Now we have to see the nature of what is considered a ‘Totalitarian regime’ . A totalitarian regime is one that control every aspect of its subjects’ life. And if the prescribed code is not followed he is put to death or near-death incarceration (We have seen this in Nazi Germany, Soviet Communism and Saddam Hussein’s Iraq)

Let me give an example.

Millions of people get impressed and follow the ideology. They get a nation to rule. In that nation, Marx insist that all its citizens should raise the following slogan: 'There is only one true scientific communism. That is Marxism, and Marx is the greatest of all scientist. Lal Salam Marxism'

All the citizens are supposed to raise this slogan five times in a day, dusk to dawn.  There is no time  given for the students or citizens to think or question. The chief instructor says that it is written in the manifesto. That’s why it is scientific. He also asserts his pupils need not think that much- because is time to chant the slogan!

The above example is a generic illustration of what is totalitarianism. You can substitute the words Marx and scientific with any other term.

Essentially, Totalitarianism is complete control. Any objection or criticisms is plucked at the bud.

5. While Zakir Naik desires freedom for propagating his ideas, in the land of his ultimate goal, there is no freedom to propagate a contrary idea- because he believe that what he is following is the ultimate, absolute truth!

Naik2 , indeed, is the test case of what Karl Popper mention as ‘Paradox of tolerance’ .

To quote him again:

If we extend unlimited tolerance even to those who are intolerant, if we are not prepared to defend a tolerant society against the onslaught of the intolerant, then the tolerant will be destroyed, and tolerance with them

Whether Zakir Naik and his institutions need to be tolerated is a matter of Indian state’s discretionary right. I think the instruments of state should be given free hand in dealing with him.

The audience of the likes of Zakir Naik are people who are ‘groomed’ to a particular way of thinking. Antidote to such reactionary ideas is to make students learn techniques of critical thinking early in their school years. This blog propounds to the explore the building blocks of this cardinal skill.